Administration Deals American Public a Left Hook, a Right Cross and an Uppercut.

If you’ve been scratching your head wondering just what the hell this administration is doing, I think you had better start wearing a hat before you give yourself brain damage.

Let’s do this in no particular order. First the left hook: The President and his crew have decided that a symbol synonomous with the name of Jesus needed to be hidden when Obama spoke at

Georgetown University, which, for those of you who have not picked up on this, is a Catholic university. Having taken away the risk of offending atheists everywhere, Obama has managed to offend Christians everywhere.

But, really, from this man did you expect anything different? If Obama is at the podium, his handlers certainly don’t want the public reminded that there may be someone greater than he. MAY be. They’re not sure.

Here comes the right cross: In a memo to the nation’s law enforcement agencies that would qualify as the most damaging, divisive, derisive, demeaning and never-to-be-topped-were-it-not-for-the-fact-that-we-still-have-almost-four-years-to-go, Obama’s Homeland Security czar has smeared the military, Christians, anti-immigrationists, states-righters, pro-lifers and those that “are antagonistic towards the new presidential administration.” 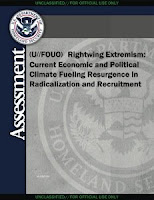 The report, entitled Rightwing Extremism: Current Economic and Political Climate Fueling Resurgence in Radicalization and Recruitment pretty much paints you as apotential domestic terrorist if you hold views that are not in line with the administrations. Dangerous stuff, to be sure. Great way to thank the active military, too - pointing them out as potential recruits for extremist nut-jobs. Extremist nut-jobs being, of course, those who disagree with Obama's policies.

And finally, the uppercut. The Justice Department is releasing never-before-published documents describing “harsh” interrogation procedures used by the CIA when questioning terrorist madmen who think the only thing better than massacring a thousand Americans is massacring ten thousand Americans.

I’m not making this up. I wish that I were.

The JD promises no prosecutions. Big deal. In one of the most disgusting acts of political grandstanding it has ever been my misfortune to comprehend, the demonization of America, by Americans, becomes more important than protecting the lives of American citizens. If you’re not sick, I mean really sick, to be reading this, I don’t know what to tell you.
Posted by Frank S. at 12:24 PM

Depressing to read; how shall we stay hopeful?

Well, on a DVD called "Key Constitutional Concepts" I watched today, there was a part about President Truman's seizure of the nation's steel mills in April of 1952. There was footage included of Clarence Randall of Inland Steel fighting back via television, characterizing the seizure as unconstitutional, and vowing to do something about it. Anyway, the fight ended up in the Supreme Court, which was packed completely with Roosevelt & Truman appointees, one of whom was even the President's poker buddy. But, the court found against Truman, citing the Constitution in their ruling, and that the President had acted outside of his powers.

Am I sick reading this? How can one be sick under the watchful eye of Lord Protector Obama? The administration has managed to demonize anyone with traditional American values, suggest that our brave military is a breeding ground for home grown terrorism, marginalize those who would profess some measure of religious belief and not-so-rhetorically declare war on any who do not bend to the clarion bells of Hope & Change eminating from the throne of the "Annointed One."

Two centuries of honor and greatness being reversed in 100 days. The slow, plodding work of government, deliberatly devised that way by the founders, now cast aside in an arrogant, agressive end run to establish a self- perpetuating liberal majority via handouts, deceit and the intrusion of government's meddling interference into as many aspects of American life as possible, in the move to nationalize banks, industry and health care.

Bailouts, spending and more spending have placed the noose of debt service around us, our children and our grandchildren. Government agencies will decide who gets paid and how much, where money can be lent and for what purpose, what cars should be manufactured, who receives what medical treatment and who goes without. Free market capitalism, the only real hope to right the economy, is characterized as the demon, and the Lord Protector and his minions are portrayed as the only hope for the masses.

If the domestic damage to the country isn't enough, look beyond our shores as Obama puts his stamp on American foreign policy. Unconditional open dialogue with Iran, castigation of Israel, our strongest ally in the middle east, promises to reduce our nuclear stockpile, weak-to- invisible reaction to North Korea's brazen nuclear ambitions, overtures to Castro, Chavez and Noriega to put our past differences behind us, and apologies for America's arrogant past (Normandy, Kuwait, Iwo Jima, et al I presume)
He approaches the dictators and terrorists of the world as one would a small, misguided child, confident that his slick rhetoric and political guile will win the day, when in reality a bully can smell fear, and having smelled it, tastes blood and strikes.

So yes, Frank, I'm feeling sick, but unfortunatly not nearly as sick as I think I'll feel after four years of this mad rush towards socialism, fueled by a populace which has mortgagaed its liberty for entitlements. As the soft tyranny of this administration continues its unrelenting assault on American values and individual freedom I feel we will look back on a trail of rape and destruction of our way of life which will render Sherman's March a mere walk in the park.

Sick is not word.
Nico, the rush to socialism won't take 4 years at this rate.
We need to put the pressure on our so called Representatives in every way possible. I think Schumer is a lost cause. Gillabrand we may be able reach, but that will require a state wide effort.
Targeting McMahon is good for us here on thIsland, but we need to reach out and coordinate with those in other congressional districts through out the city.
It's alot to do and unfortunatley we are behind the 8 ball.

You are right, Paul R, in that we need to act politically to stem the tide toward socialism as much as we can for the short term.

But the long-term keys to this Road to Serfdom (hat tip - Friedrich Hayek) must be in response to the phenomena addressed by two statements by Nico in his post above:

1) '...a self- perpetuating liberal majority via handouts...'

2) '...a populace which has mortgagaed its liberty for entitlements...'

Until and unless there is a true understanding of the nature of individualism, a solid knowledge about the philosophical and political underpinnings of this unique country, and a widespread desire to want to be a part such a system again amongst Americans, liberty will not prevail.

A HUGE part of the fight is educational. And vocally pushing back, via the political actions suggested, with reasoned arguements and thoughtful answers, will be a part of that goal.

P.S. This is Lorraine

Don't know if you heard the our Assemblyman Lou Tobacco was running around Mahattan on Tax Day with Newt Gingrinch being "starstruck" Now, I know we did not invite any pols but this just ticks me off. No one reached out to us, though I am sure they sent spies. This is their home district and they did nothing for us and do not take us seriously. When we reached out to the Young RRepublicans in the beginning for help even though they were couteous they basically said sorry, but your on your own. I am really just getting tired of all of them - term limits needs to come into play here somewhere. These people have probably never worked a day in their lives, spend time running toward the cameras (Hello - nice picture of Tobacco standing in fron of the bridge protesting the tolls) and it is all at our expense.

Ansd from McMahon's lame response in the Advance to the protest he is not going to change anything or take us serously either. 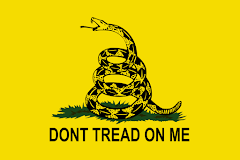